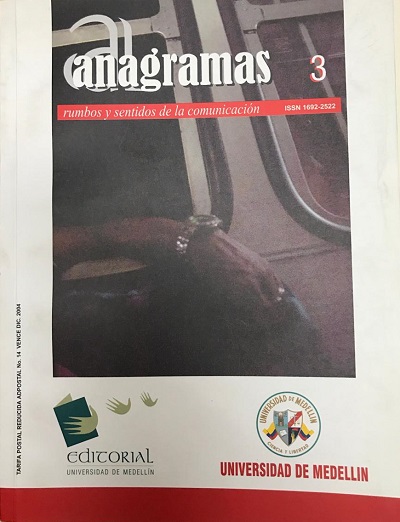 Des-winged goddess. The body as space and shifted his narrative interpretation

In Colombia, due to the war for the territory and to violence, thousands of communities are submitted to forced displacements: this uncontrollable force which today, dislocates, expulses, de-situates millions of people from their spaces and submits them to the dictatorship of intolerance.

In the text, The De-winged Goddess, the body is analyzed as a space and the problem of forced displacements is approached from an esthetical and communicational perspec­tive. In the body expressions of the displaced person, there is a projective representation of his story, of his silent duels, the uncertainty that marks him, the problematic which in essence has restricted his liberty, and of the independence to be decided upon.

Urban, juvenile, cultures, are configured as spaces of identity and socialization of youths for youths, and are strengthened with the weakening of the traditional integration mechanisms (school, family, works religion) and the disrepute of the political institutions, in this context, urban cultural studies acquire relevance, where young people emerge as individuals and as productive groups of Culture because of their ways of understanding and taking on the world.

The juvenile Cultures are confronting the structuring identity, thus we recognize in them the emergence of instable, mobile, current, rootless identities... which confront the traditional notion of identity: fixed, unique, and homogeneous. The renewed juvenile identities are denominated fragmented identities... pre-formative identities, for the identities developed in juvenile cultures are adapted, disfigured, or reconstructed by the young people: they invent their own identity and even more so, they are unfaithful, that is, they resist to remaining any polished, defined, determined, or structured identity.

The collective relationship, juvenile culture-esthetics-identity, opens up a renewed perspective of researching which we are carrying out to the University of Medellin and it pretends to show the core role Which music fulfills as a juvenile identity force which, furthermore, enhances the possibilities of creation and cultural production of the youths for the youths.

Political dimension of speech communications director in the corporate scenario

The political dimension in the discourse of communication directors on the corporate scene is a part of the research the discourse of the corporate communicator; and it is the result of an interpretation work of the data administered by the communicators of the twelve organizations that constitute the sample. Likewise, the title suggests a rectification which turns out to be indispensable and which has to do with the limits and reaches of the research, since the actors are, in their great majority, directors in the area of communication.

This essay aims at delving into the thesis proposed through the text: “The constitution of the Individual in the Discourse of the Corporate Communicator”, in which the political feature is sustained in the constitution of his identity as a strategist, as well as in the action he unfolds with the publics (internal and external) for the achievement of the organization’s purposes.

Now then, if in the aforementioned thesis, the emphasis was made on the building of the identity; in this case, the analysis is centered into the linguistic statements with which actions, purposes and strategic functions are expressed, which in turn acquire a political feature, as long as the strategist’s position responds to the function of an ally which the organization confers to him. In his condition of an ally, the Communicator will have to harmonize the exercising of a power which is only exercised by those who really boast of it; and hence, he will put his know-how to the service of the institution, a fact which, in the sphere of communication management, is translated into the ability for the symbolic control of the publics with whom the organization is related.

The aforementioned allows us to. argue that, although the communicator’s political aspiration is the positioning of the communication area in the domain of the organization’s high spheres which, in turn represents the acquisition of a prestige for him, the power that he reaches lies within his ability for: congregating wills, orientating the individuals actions, and positioning the organization in the business sphere; That is why it may be affirmed that the strategist communicator’s political action fulfills the role of an absorber or an “earth pole” of the power effects exercised by those who boast of it; and thus, his political purpose is to diminish such effects and to achieve the adhesion of the social actors (publics) to the interests of the institution. Nonetheless, such an action, far from being plain, acquires attention modalities in variances related to the administration’s style, as well as to that of the communicator.

For the effects of sustaining the political dimension of the corporate communicator’s discourse y, subsequently, the modalities his action adopts, the text presents the following structure: firstly, it is about contextualizing and delimiting the notion of politics, as well as its relation to power. Secondly, it analyzes, from the discourse perspective, a corpus of enunciations emitted by the communicators throughout the interview, having in mind the categories of: the action front, political reference, strategic function, and political purposes. Thirdly, an approximations is to the modalities of the communicator’s political action, parting from the identification of common constants or features. Finally, the contingent feature of the political action is approached, under the supposition that such contingency is determined essentially by three variances: nature of the organization, managerial style, and the communicator’s modality of administration.

This paper shows the results of a prospective research over the tendencies that can influence upon the marketing proposals and actions throughout the first decade of the millennium, which tarns out to be especially important, in order for those in charge of the enterprise’s commercial action to carry out a strategic planning of their medium term activities. In this paper, the detected possible tendencies, along with the most probable consequences derived from them; are expounded in subject areas, in order to help those who wish to anticipate to what pre-visibly may occur in their field of activity

Drácula: The blood like the love never dies. Hermeneutic analysis of the blood in Francis Ford Coppola's movie

Appropriation for the look. The paradox of the "fingerprint" in the photographic image

The photographical image, because of the way its technical genesis is produced, has been related with the prints and the sign effects it supposes. Nonetheless, with the arrival of the digital image and the nature change associated to it, is it possible to sustain the same principle?
More.. PDF (Español (España))
Abstract PDF (Español (España))
View All Issues