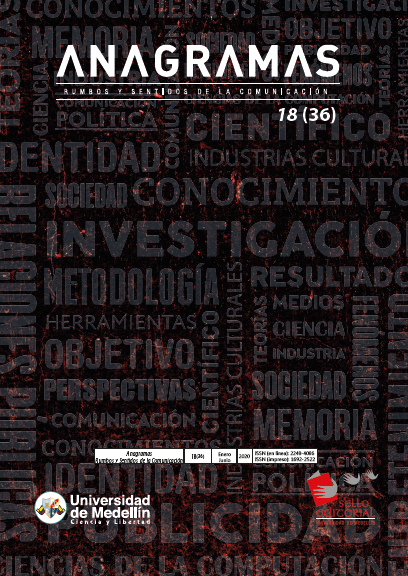 The Challenge for Communication Researchers

This research work analyzes the influence of television series that are broadcast through streaming platforms in Mexico. The research took a representative sample of 400 young people, who were surveyed to know the impact of these communication products in the construction of their perception, political participation and political culture in the last elections of July 2018. Through a quantitative methodology and the use of the statistical sample, belonging to 12 thousand 884 voters from 18 to 19 years old from the capital of Puebla, from the electoral district 12; it was found that there is a low degree of appropriation, the young people surveyed do not determine their perception of Mexican politics from the series they visualize, cognitive mobility is therefore not determinant for this case of the study presented.

Validation of the videogame consumption habits questionnaire in Chilean millennials

The massification of the use of video games has been growing rapidly and in addition the projections suggest that use will continue to increase over time. For the measurement of video game consumption there are numerous questionnaires, which are mostly associated with the diagnosis of psychological disorders. As the objective is to measure the use and consumption of videogames and not the diagnosis of psychological disorders, it was decided to validate the questionnaire of habits of videogames consumption, originally created for the Spanish population. For this reason, a confirmatory factor analysis was carried out for the Chilean millennial population, who are people born between 1980 and 2000. For the validation, a sample composed of 412 university students was used. Reliability and validity were calculated. This was measured with the composite reliability coefficient, mean variance extracted and Cronbach's α. The maximum likelihood estimate with the robust Satorra-Bentler correction. The results obtained to validate the scale show that it is valid and reliable for use in young Chileans belonging to the millennial generation or generation Y.

Audiences and Community Media Studies: Notes for a Necessary Reencounter

This article presents lessons learned and debates about the relationship between academic knowledge and nonprofit communication projects, linked to the results of a hearing research process with four community radios of cooperative management in Greater Córdoba (Córdoba Metropolitan Area). This research aimed to contribute to its sustainability through the production of systematic knowledge about its real and potential audiences. Eight studies were conducted, two for each radio, one of a qualitative nature and one of a quantitative nature. The quantitative one consisted of population surveys on media consumption. especially oriented to radio and local media, as well as to levels of satisfaction with local and regional information. The qualitative ones were developed through in-depth interviews and focus groups, according to each case, and addressed radio listening modalities, different ways of identifying with the radios in question, as well as issues related to the experience of living in the cities where the radios were located.
Among the most important findings, there is a set of data that makes it possible to problematize the notion of convergent consumption, since it is possible to recognize forms of audiovisual consumption that articulate analog and digital media, in which long-term links are articulated with certain media, with strong affective and custom components with new types of consumption. Both the research process and its results enabled recognition that strengthened the media in question, but also updated a relationship between research and community
media in which academic knowledge, concerns generated in practice and theoretical methodological approaches were articulated in the that there were learnings that exceeded the research results.
More.. PDF (Español (España)) Infografía (Español (España)) Infografía
Abstract PDF (Español (España)) Infografía (Español (España)) Infografía
Articles
Woman´s Emotions as an Advertising Strategy of the Pharmaceutical Field at the Beginning of the 20th Century in Chile
Mario Millones Espinosa, Nicolás Hernández Maluenda
Abstract 514
DOI https://doi.org/10.22395/angr.v18n36a5

This article aims to reflect on how emotions were part of the expansion of the pharmaceutical field in the early twentieth century in Chile. To introduce the consumption of medicines at home, different pharmacies and apothecaries advertised their remedies in magazines like Family. Two important events took place: first, the gradual use of emotions in drug advertisements and second, the constant use of women in this strategy. Through her, as a woman and mother, and the different moral obligations inscribed in such roles, that we believe that the medicalization of the family needed some emotional argument for the expansion of the pharmaceutical field.

A very beautiful writing. The politicity of metaphor

In this paper we propose to analyze the political potential of metaphors, taking as a case study the novel Una muchacha muy bella (2013) by Julián López. Through content analysis in a contextualized way, in the first place, we will inscribe this text in the broadest universe of the production of written fiction of the second generation that deals with the seventies memory and in the context of memory policies implemented during the Kirchnerism. Then, we will attend to the metaphors present in the novel as an aesthetic resource to narrate terror during the years of military dictatorship. Finally, we propose to think the scriptural practice in its political dimension, by making collective a tragedy that moves away more and more from ‘familism’.

The reflection presented here emanates from two investigations carried out with women victims of political violence in Colombia, both located in the field of Social Communication. Methodologically, hypothesis of imperfect peace theory and peace research were tested based on artistic transcoding exercises through processes conceived from a Social Communication perception and performed by victims of the conflict. Its purpose was to produce a personal artistic work from pre-existing ones. Taking as a starting point the stories of their experiences, participants confronted artistic pieces and transformed thesa work that inspired them, to create another one of their own. This experience, according to these theories, fosters the mourning and resilience of victims through personal empowerment, fundamental to peace. The social background of these experiences has been the post-conflict following the peace agreements between the farc and the government. The first process was advanced with Afro-descendant women displaced from the Pacific to Cali; the second with students socially disadvantaged by violence in their home regions. These exercises resulted in a change in women’s perception of their violent personal experience and, as a consequence, in their ability to make peace.

Towards an epistemology of communication and gender: possible [re]articulations between fields

This article addresses the intersectionality between the field of communication and Gender Studies. Based on two investigations developed by the authors, it proposes posible nuclei of debate and articulation between a transdisciplinary field of knowledge and ananalytical perspective that challenges androcentrism as masculinizing knowledge structure.

Defining communication as an eclectic field implies recognizing that its analytical anchoring is situated in the frames where social meaning is produced, structured and emerges, not only in linguistic-discursive forms, but also in phenomenal and experiential ways. At the same time, the gender perspective focuses on the modulations that power acquires in sex-generic relationships, and in the configuration of socio-cultural performance scripts.

The vortex of convergence between communication and gender enables inquirí into the diverse cultural practices that condense, perpetúate or impugn unequal forms of power in a sex-generic key, and in the performativity of social meanings.

Cyberfeminism Old struggles, new strategies: The virtual escrache as a tool of action and resistance

In the Information Age there has been a total transformation in each plane of existence in both individual and collective terms. In the midst of these fierce changes, the ways of linking in networks and of being-existing in virtual spaces of encounters and disagreements have changed.

In this work we set out to inquire about the strategies that women and non-hegemonic sexualities recreate, making use of the possibilities proposed by new technologies, to deal with situations of gender violence. That is how we approached virtual escraches as tools of great potential. We analyze virtual escraches from a case study in Córdoba, Argentina to delve in the senses acquired by escraches and their possible effects.